A recurring theme in my life lately is scars, both visible physical scars and the emotional scars that we receive through life changing experiences. We all have these scars and unique markers that make us who we are. Often we think of these scars as flaws and imperfections that we wish we could change or fix, when we just need to work through the scar tissue.
I’m sharing my scars both visible and invisible today and how I’ve worked through the scar tissue.
I have two quite visible scars on my body.
One is on the right side of my face. I was attacked by a golden lab when I was three years old and had 27 stitches and plastic surgery. Ever since then the right side of my face has always had what appears to be a large crease and a raised bump. Since this scar has been with me since I was three, it’s just been a part of who I am. 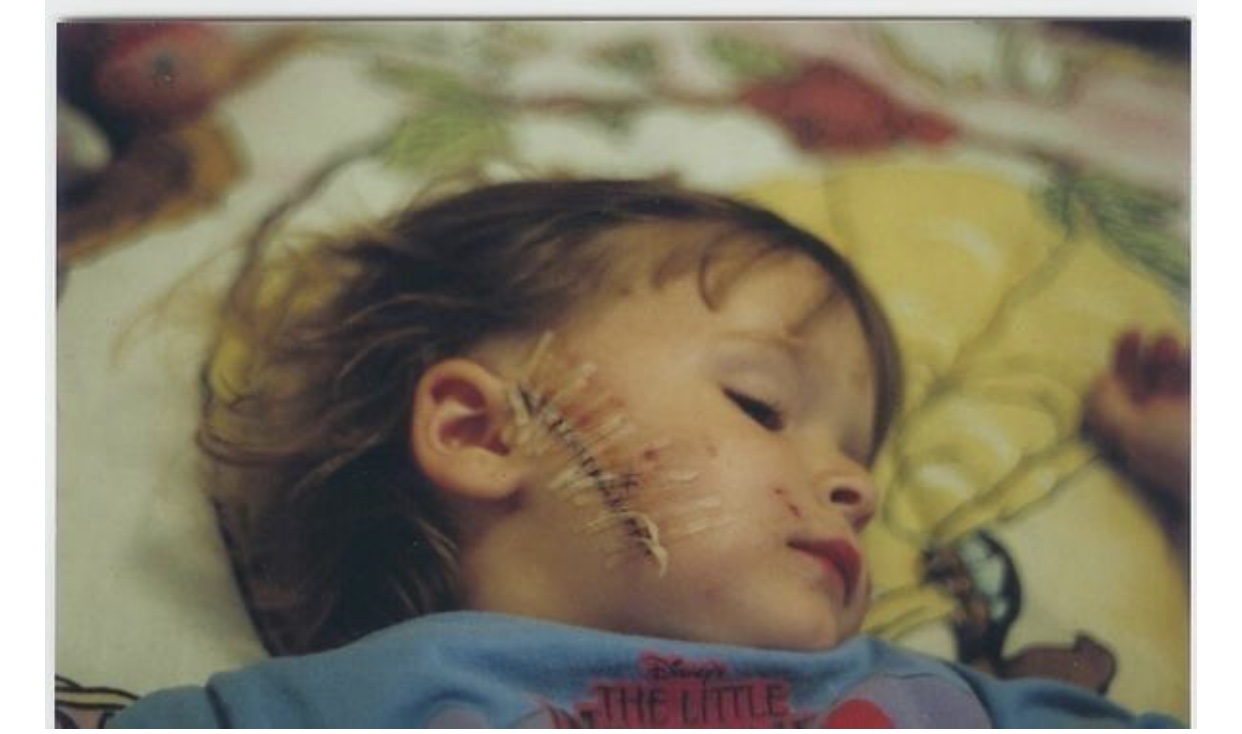 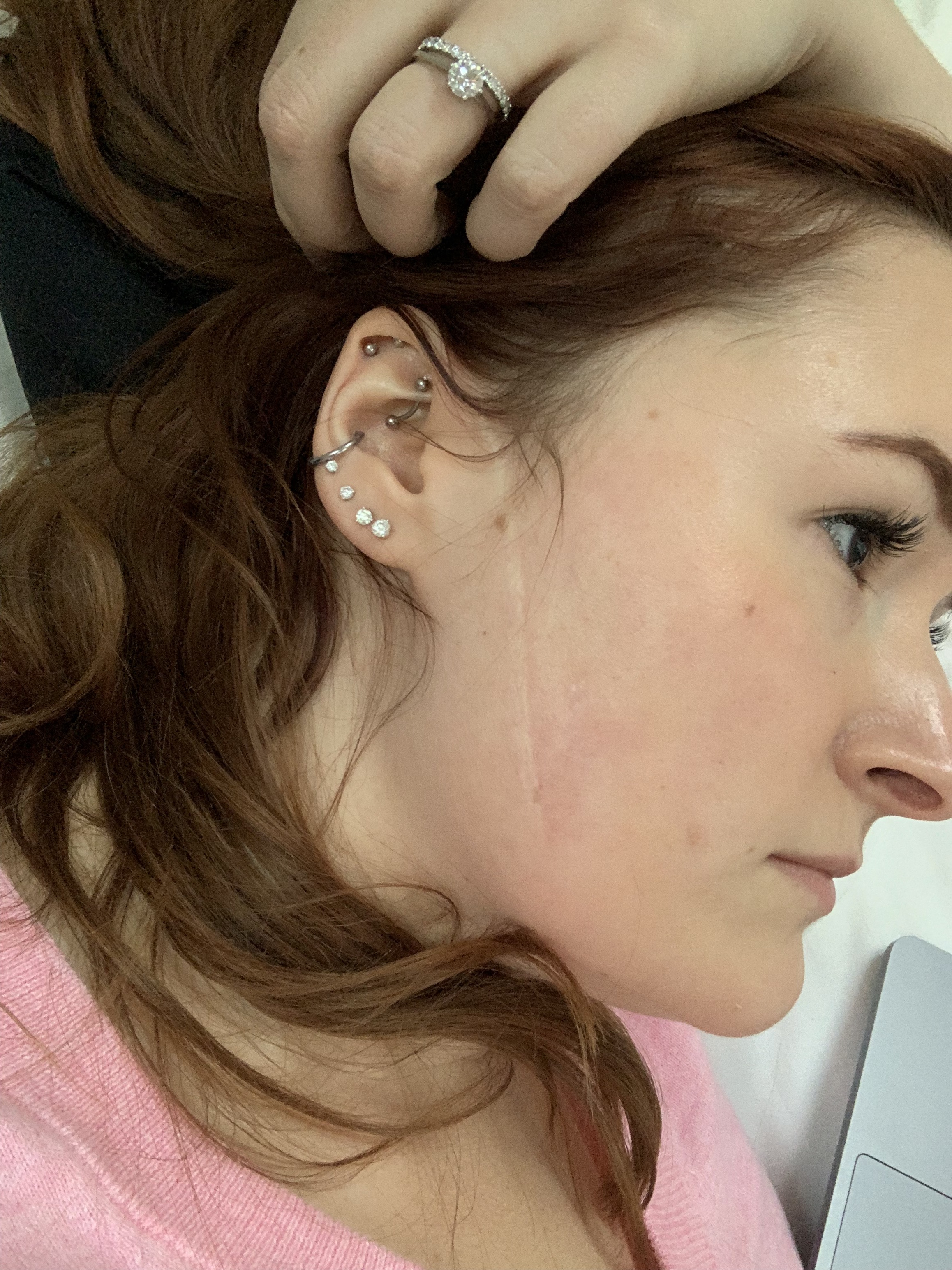 My second scar is fresh and new. It’s from my surgery in November 2018 to remove a tumor from my right quad muscle. Working through the healing process and preventing scar tissue has been painful. Often times I find myself wanting to cover, edit, or hide this visible mark. It’s not that I’m self conscious about what others think, it’s that I’m angry when I look at it. The scar is a visual reminder of what I had to stop doing so I could have surgery and what I am still limited in doing because of it. 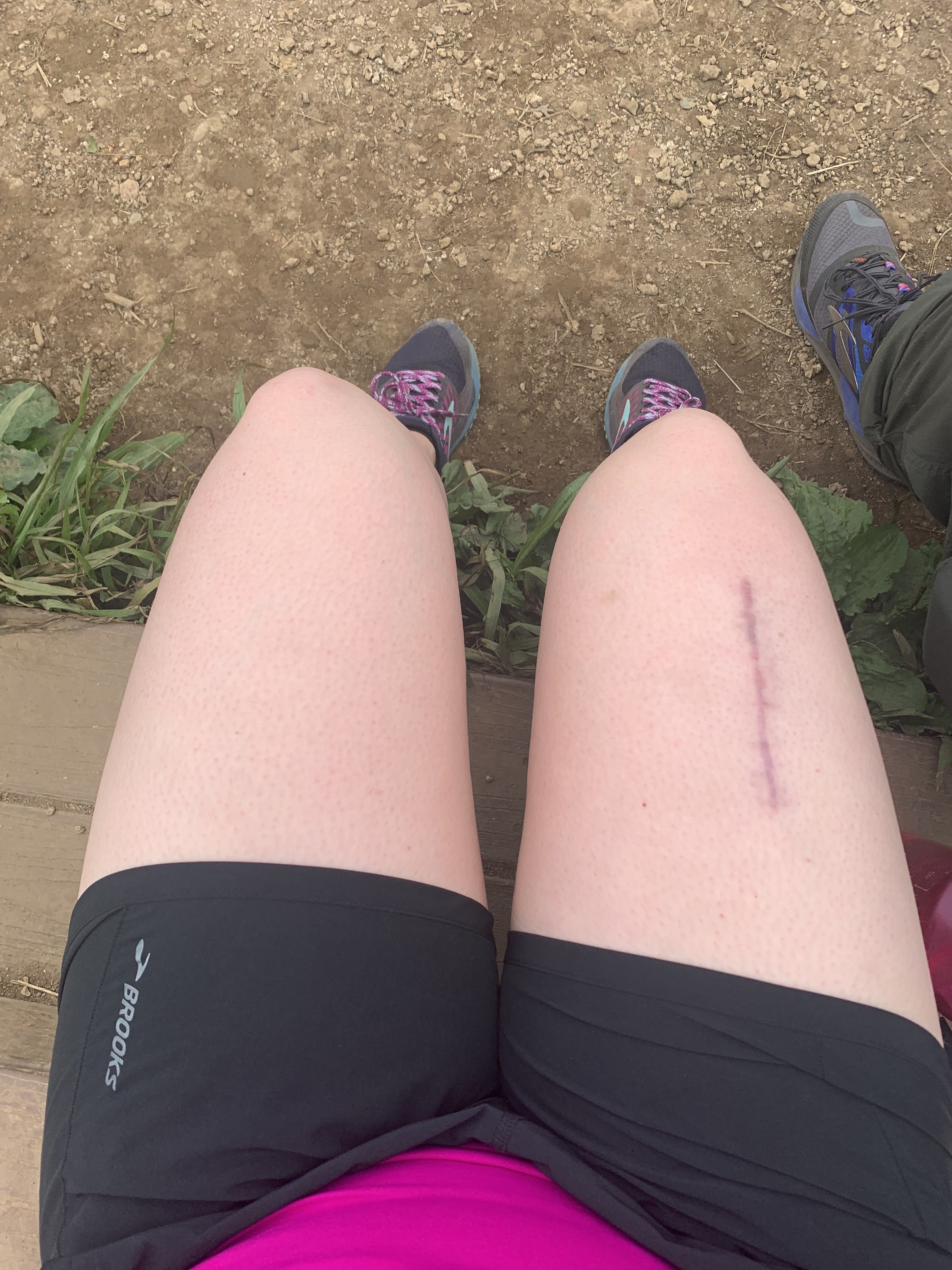 I also have invisible scars.
I am the child of two addicts. Both of my parents are alcoholics. Often times we separate “addiction” and “alcoholism” but in reality, it is an addiction and the substance is alcohol. Just because the addiction is to a legal substance does not make it any less serious.
My parents alcohol abuse started long before I was born. I’ve had to come to terms with the fact that I am the child of two addicts. Those two addicts are wonderful, hard-working people who love me an immense amount, that have given me everything they could.

My childhood
I can’t easily explain what it was like growing up in my home with two parents suffering from this addiction. What I can and will tell you is that I never doubted their love for me and that they never physically hurt me or each other. I knew both of my parents drank alcohol, but it was my dad who drank the most when I was growing up. My mom said it was because he worked so hard for us and deserved a break at the end of the day after working two jobs. My parents would (verbally) fight, and as I got older sometimes I would get involved to defend my mom.
One particular incident stands out in my adolescence: There was a fight about the cell phone bill because I had gone over on my minutes or texting. Everyone was yelling. We walked out of the room in a huff. A few minutes later I walked by my dad’s chair and he made a movement like he was going to come at me (again he never physically abused me and this was the only incident like this). I freaked out and left the house and my mom told my dad that he could not sleep in our house until he stopped drinking. He slept in our motorhome until I moved out.
Then in 2010, my dad got sober. He quit cold turkey and never looked back. I have never been more proud of him. It completely changed our relationship and I was able to get to know him on an entirely new level.
On the other hand, my mom’s drinking escalated after I moved out. Yes, she always drank but I don’t remember her being severely intoxicated until I was in college. In December 2016 she had a health scare related to drinking and she ended up in the hospital. They warned her what would happen if she kept drinking. She was sober for a while after that hospital visit, but somewhere along the line she relapsed and started drinking again. In Spring 2018 she was in and out of the hospital with mysterious and scary symptoms. Her feet, ankles, and legs had swollen so much she couldn’t wear real shoes or pants. Her belly looked like she was 6 months pregnant, she lost her muscle, and many other symptoms. Finally in the summer of 2018, she was diagnosed with cirrhosis. It was a relief to finally have a diagnosis and a plan of action to get her healthy again, but it was also terrifying. 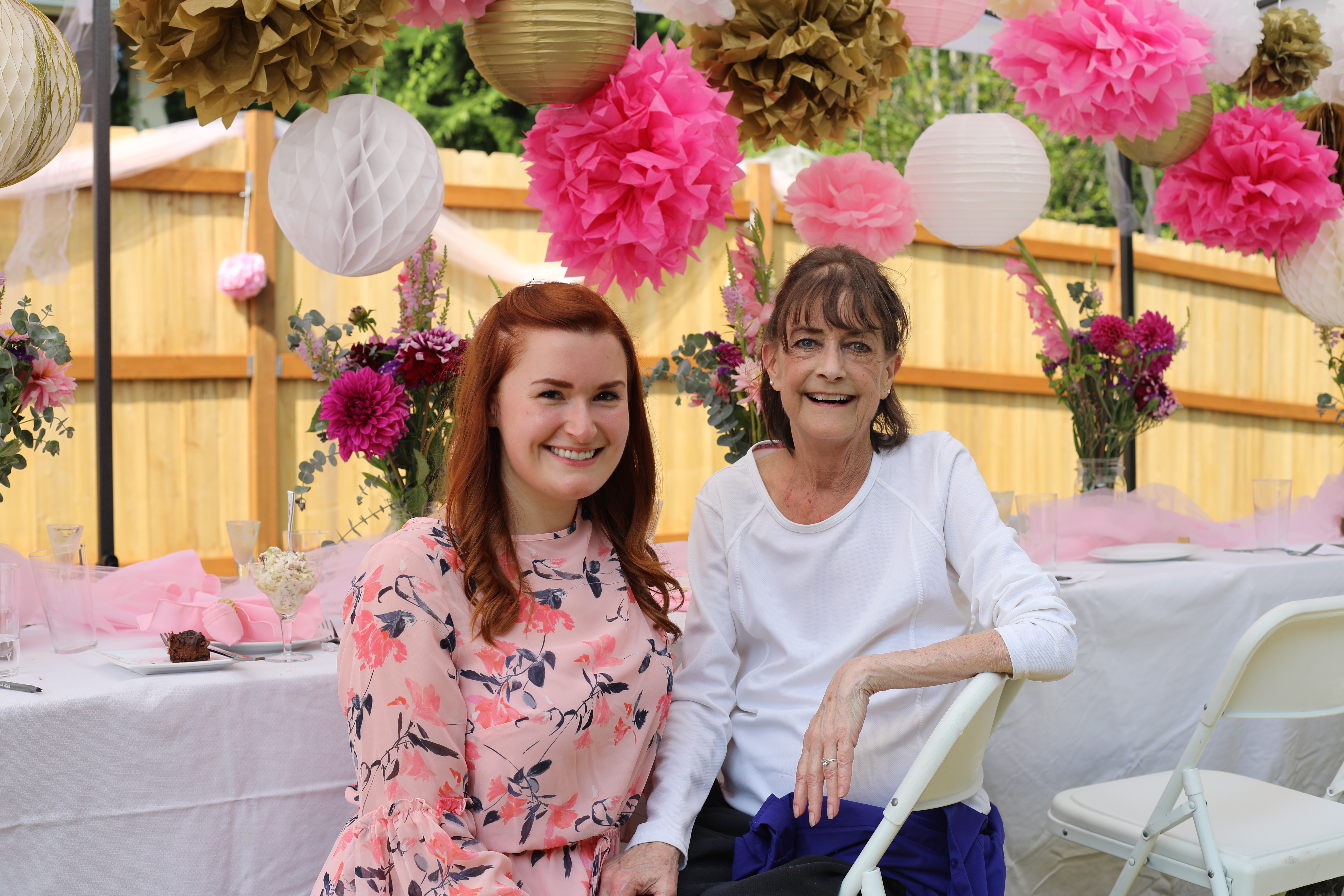 As my mom’s condition started to stabilize, my dad started to decline. He needed a hip replacement but kept putting it off due to my mom’s condition and my wedding. At some point in 2018, he relapsed and started drinking again. In March 2019, my mom called to tell me that my dad had been taken by ambulance to the hospital. He had (unknown to me) been drinking heavily again, could hardly walk due to his hip pain and intoxication level, and was having trouble breathing. He was in the hospital for a few weeks, was mostly sedated as he came through withdrawal, healed from pneumonia, and a host of other health issues. It was ugly and scary.
At present, to the best of my knowledge, both of my parents are sober. My dad has his hip replacement in July 2019 and is doing well since then. While my mother is stable, she will never be the same due to the long term impact of alcohol abuse. 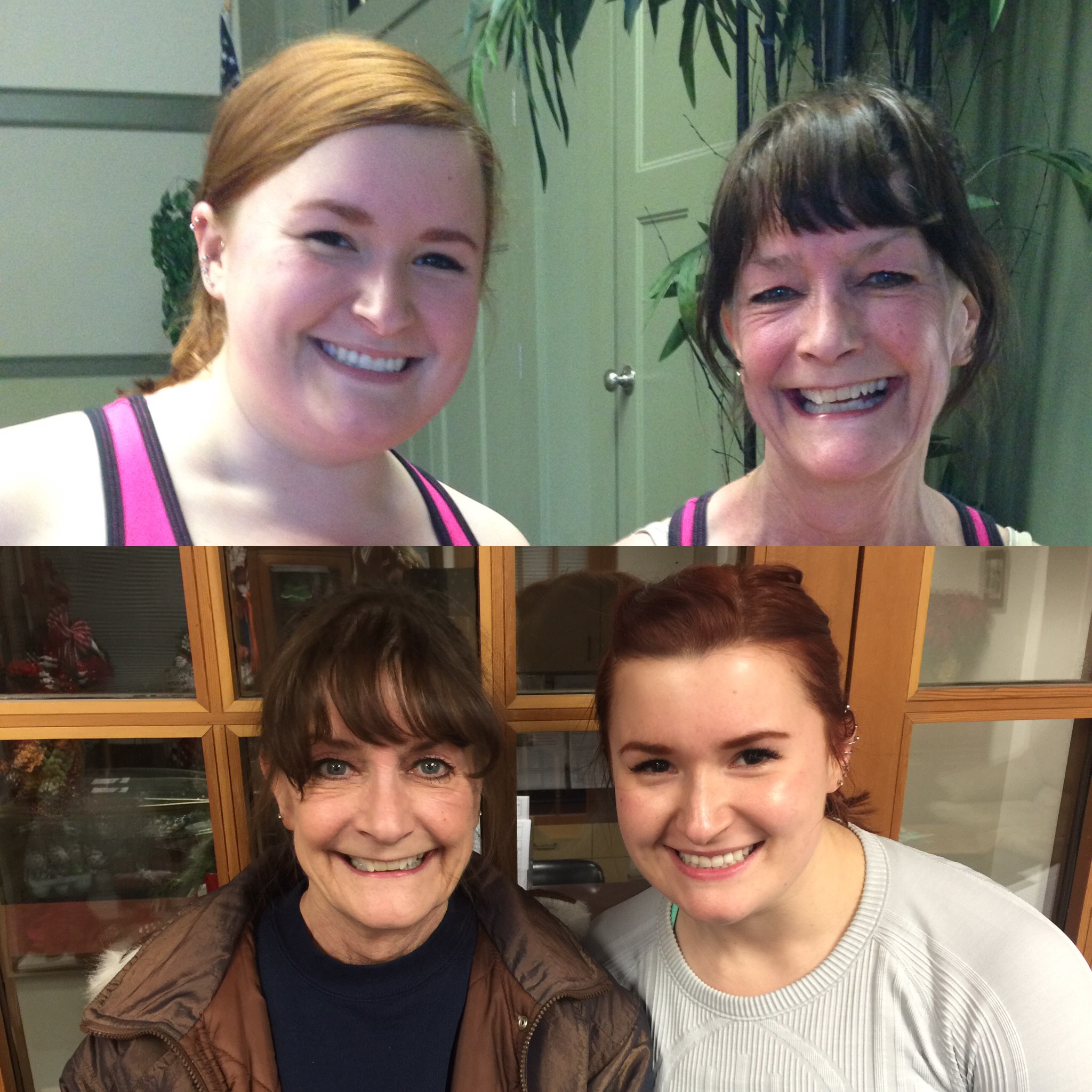 Breaking down scar tissue is painful
I’m currently at the stage in physical therapy where we’re breaking up scar tissue and doing exercises to prevent scar tissue from forming. It’s painful. My leg is bruised from the deep tissue work, sometimes I have weird pains in my hip and knee since everything is connected and my quad is recovering from the trauma of removing a 4-inch tumor. My physical therapist calls this the remodeling phase. We’re hopefully going to make it better and stronger through this painful process. 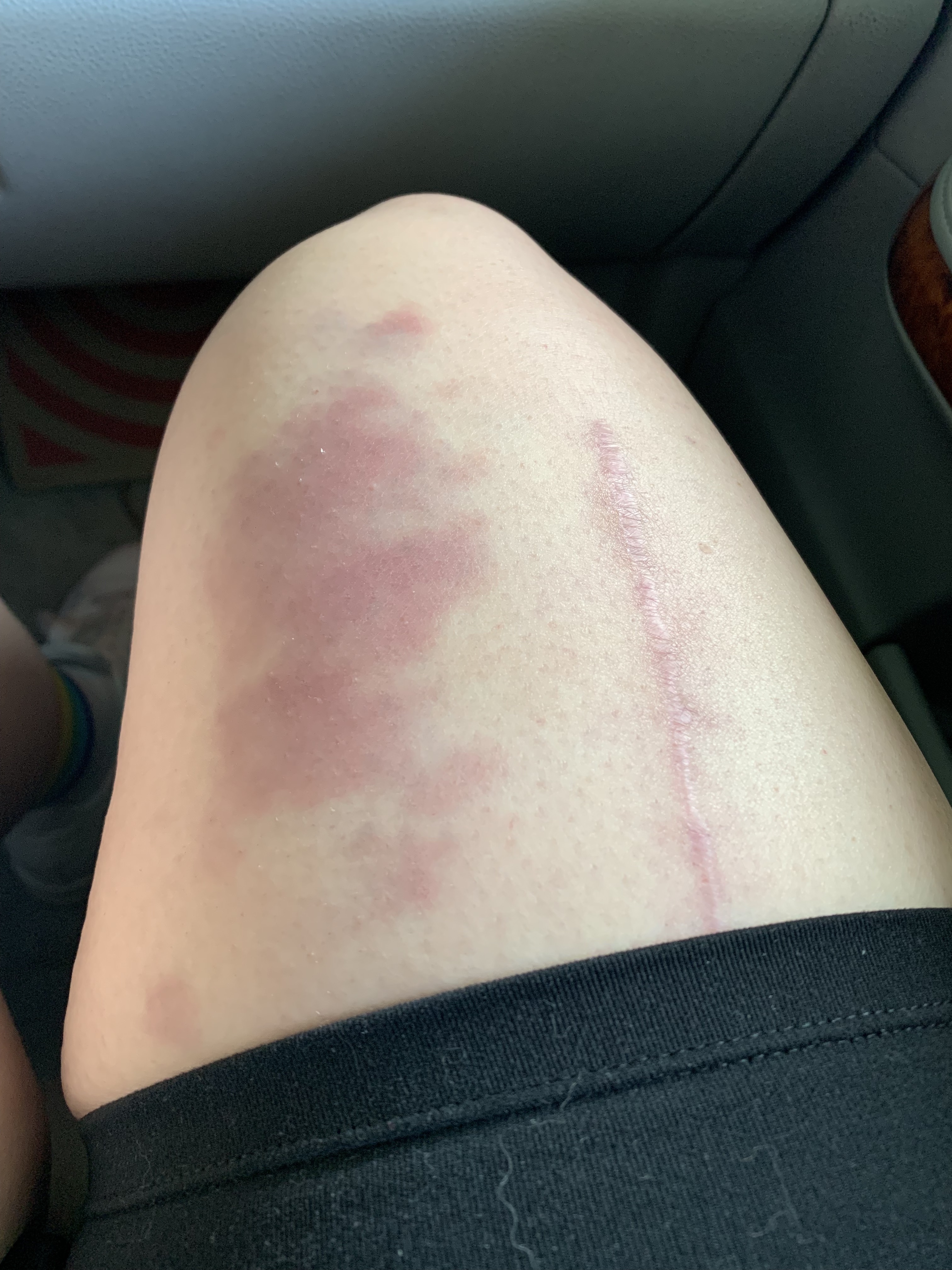 The events of the last year have ripped open my old invisible scar of carrying the weight and secret of two alcoholic parents. It’s been me coming to terms with what my childhood was like (the good and the bad), the reality of two aging and addicted parents, and working through the shame and stigmatism around the disease.
Working through that scar tissue, just like my physical scar from surgery, has been a painful journey and an ongoing process. There’s been confiding in friends, family, and coworkers, leaning on them for support through the moments that are harder than others. There’s been counseling, Al Anon meetings, conversations on forgiveness, and openly sharing my experiences. Since I’ve been open about what I’m going through, I’ve been able to build relationships with people who have experienced similar situations and in turn they’ve given me resources, advice and encouragement. I learned that I don’t have to carry this burden myself and that I don’t need to be ashamed about my parents addictions. I am working towards breaking the cycle and healing generational trauma. Of course I worry about the possibility of either of them relapsing, but I have learned that I am powerless to control any part of their lives and choices.

Be proud of your leathery-ness
In college I had a professor tell me that my facial scar was awesome and that it would be so cool when I got older because it would get all “leathery.” While I don’t want a leathery face (or leg) I do love applying this to those invisible scars that life has left on each and everyone us. When our scars are fresh and raw, whether physically, mentally, or emotionally, they are visible, and they can define us. But as we come to terms with whatever battles we’re fighting, we learn to grow and accept our scars as a part of who we are. Our skin gets tougher and we get leathery.
My parents alcoholism made me who I am today and it’s the reason I choose not to drink. While this scar will always be there, I don’t wish to change it. It shaped me in to who I am and I know it’s better to accept and embrace than to be ashamed.
I for one am proud of my leathery scars.
According to Alcohol.org, alcohol abuse is one of the biggest health crises in the U.S. with more than 15 million adults struggling with alcohol use disorder.
There are many resources for those living with an alcohol or substance abuse/dependence, as well as resources for those whose lives have been impacted by a loved one’s addiction. I’ve listed a few resources that may be helpful: Addiction Resource Center, Al Anon, Alcoholics Anonymous. 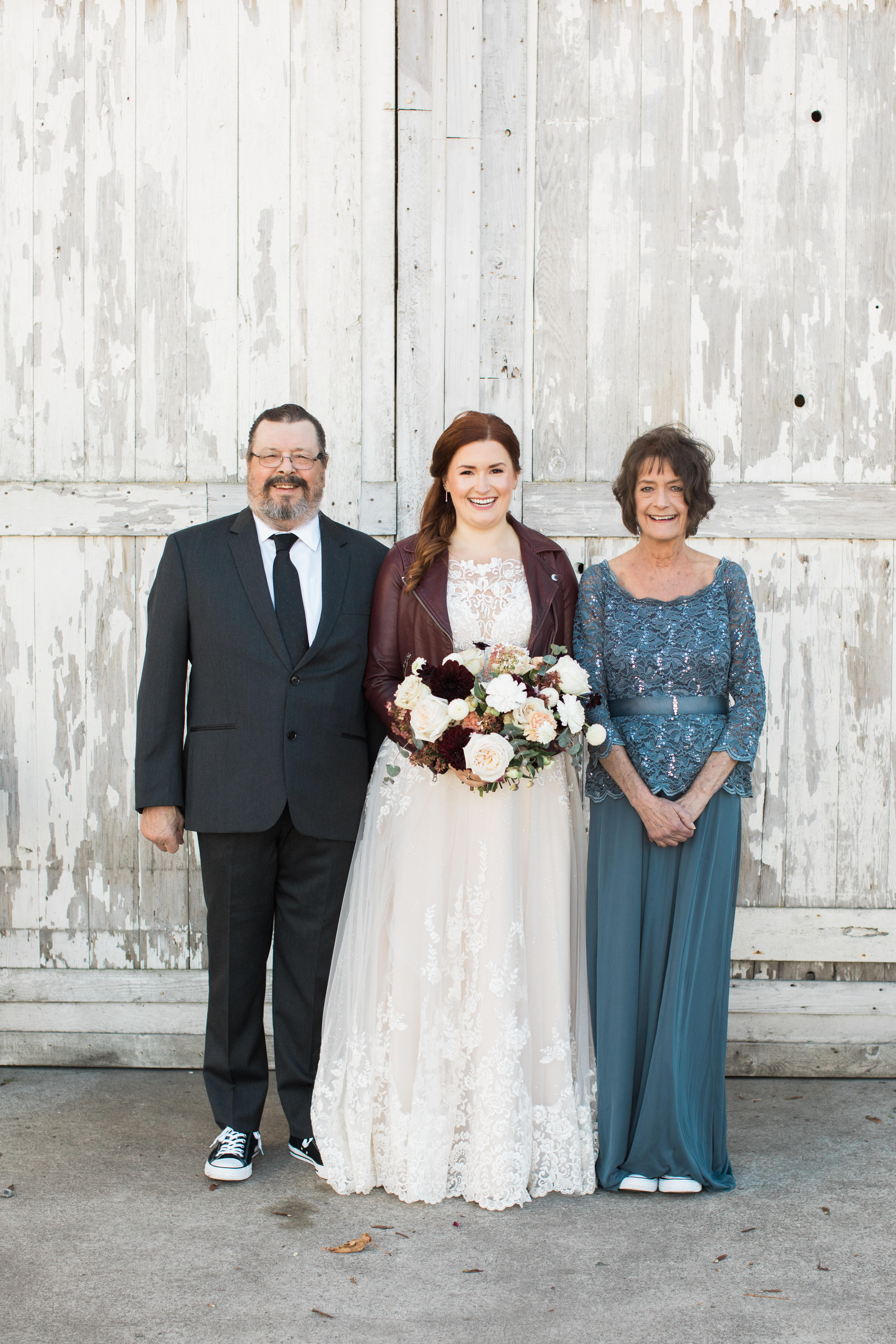