Do you know want a recipe for a great weekend adventure? Start with a free Saturday afternoon. (I know that can be hard to find sometimes, but look around, I’m sure you can find one.) Toss in a couple classic Pacific Northwest mountains. Finally, top it off with a delightful little prop plane! Mix it all together, and do you know what you get? A fantastic adventure on Kenmore Air’s Volcano Tour!

On a bright and sunny Saturday afternoon, we drove down to Boeing Field where Kenmore Air’s Volcano Tour starts. The parking lot was nearly empty and walking into the terminal, we nearly thought we were in the wrong place. But there was a Kenmore Air desk with an agent greeting us by name. Check in took all of 30 seconds and off to the gate we went, which was literally just around the corner. Two minutes after stepping into the terminal and we were standing at the glass windows, staring out at the runway. And our small plane.

Since we were the last ones to arrive, the pilot came out just a couple minutes later and gave us a brief introduction to the flight while still in the waiting area. Then he shuffled all nine of us out to the plane and we loaded up.  The plane was a small Cessna Caravan with room for about a dozen people. You have to duck when you get in and the aisle down the middle is narrow, with one seat on either side of the aisle in each row. I was extra lucky as I got to sit in the co-pilot’s seat! The pilot ran through his checklist (a literal, paper checklist) and then started the engine. As the propeller started spinning, we pulled away from the terminal and headed for the runway. A moment later and we were flying high in the sky!

We had taken off early, so the pilot detoured to the north a bit and flew us over Seattle and around the Space Needle. A quick bank to the right and we headed off to the south. The weather was perfect that day so it didn’t take long for Rainier to show. And how beautiful she was!  It took about 20 minutes to reach Rainier. It took another few minutes to fly by it, just because of how massive she is!  But seeing those glaciers up close was incredible, and there was so much snow.

After another 20 minutes traveling south, we arrived at Mount St. Helens. I’ve never climbed up to the rim of St. Helens, so it was just incredible to see. And sure enough, she was steaming the day we were there. The pilot flew all the way around the mountain, then turned around and flew the opposite way around the mountain so that everyone got a perfect view of the mountain. We were so close to St. Helens that we could see all of the hikers/climbers who were working their way up the side of it and emerging at the rim. (Jon, add that hike to our bucket list!). It was just so amazing to see so easily into the crater, and the destruction that is still evident almost 40 years later.

Our pilot was excellent and pointed out numerous intriguing sites along the way. We flew by Rainier again so that everyone on the other side of the plane could get a good view. Just a few minutes more and the pilot was pulling out his landing checklist.  (Yes, another paper checklist). I’ve never been in the front seat of a plane that’s coming in for a landing, but that was cool to watch as the runway came up and we touched down!

Even Jon, who was in the row behind me, had a great view of the action and enjoyed every minute of it. I had a fantastic time and look forward to my next trip with Kenmore Air!

Created in partnership with Kenmore Air 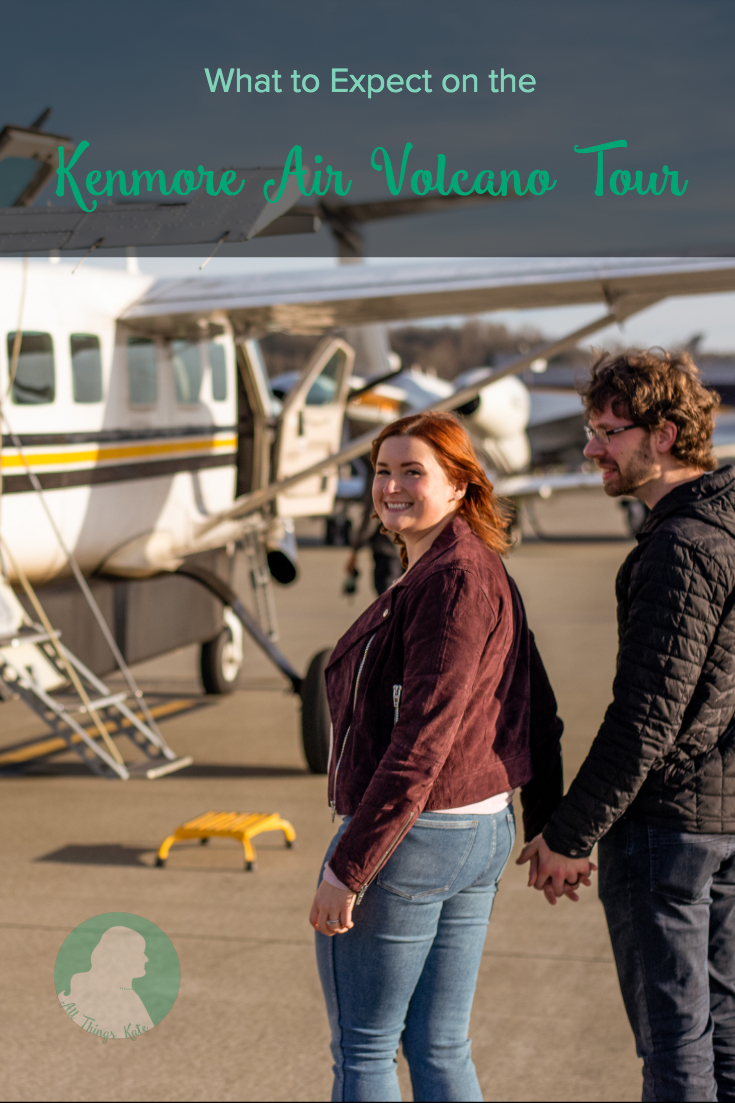