The Backroads of Baracoa 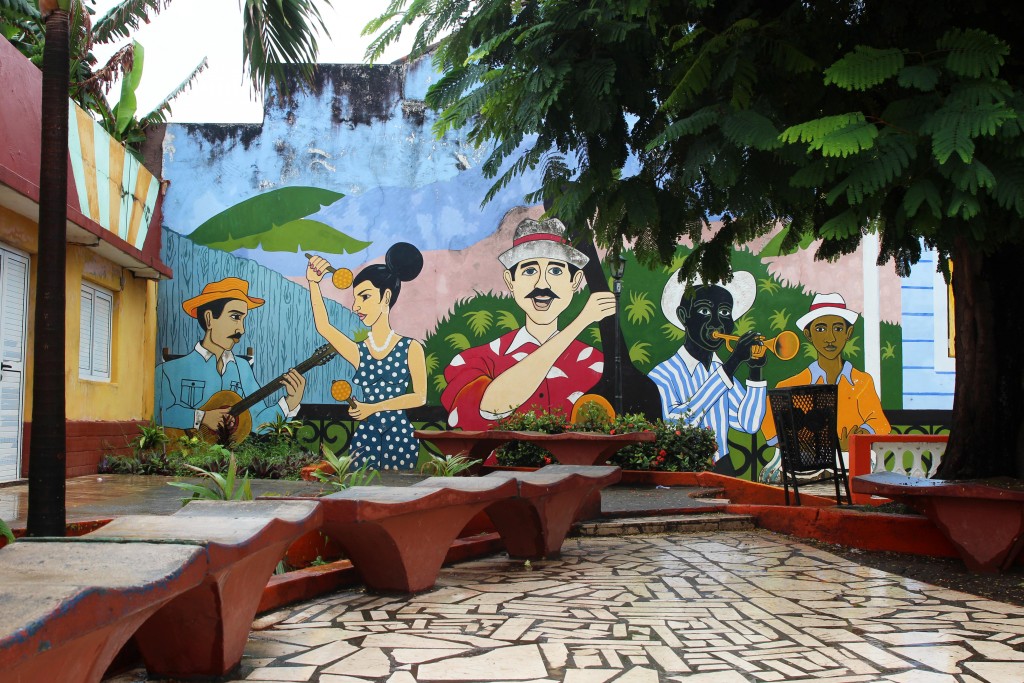 This is the fourth segment in a series of our travel adventures in Cuba. If you are planning your own trip to Cuba, please refer to my Cuba Travel Guide. You can find all of my content on Cuba here.
The next morning when I woke up I was feeling so much better than the night before, but as luck would have it, Jon was not feeling good. Unfortunately for him, we were headed to Baracoa that day, which was approximately a four hour drive. With frequent bathroom breaks and knots in his stomach he was pretty miserable, but he was a trooper and we decided that instead of staying back in Santiago de Cuba for an extra day, we’d still head to Baracoa.
Luckily, the drive went smooth: we were stopped at police checkpoints twice and once for the bathroom. As we neared Baracoa the road got very twisty and turny and I had to keep my eyes closed… Just in case. I didn’t want to get sick again. 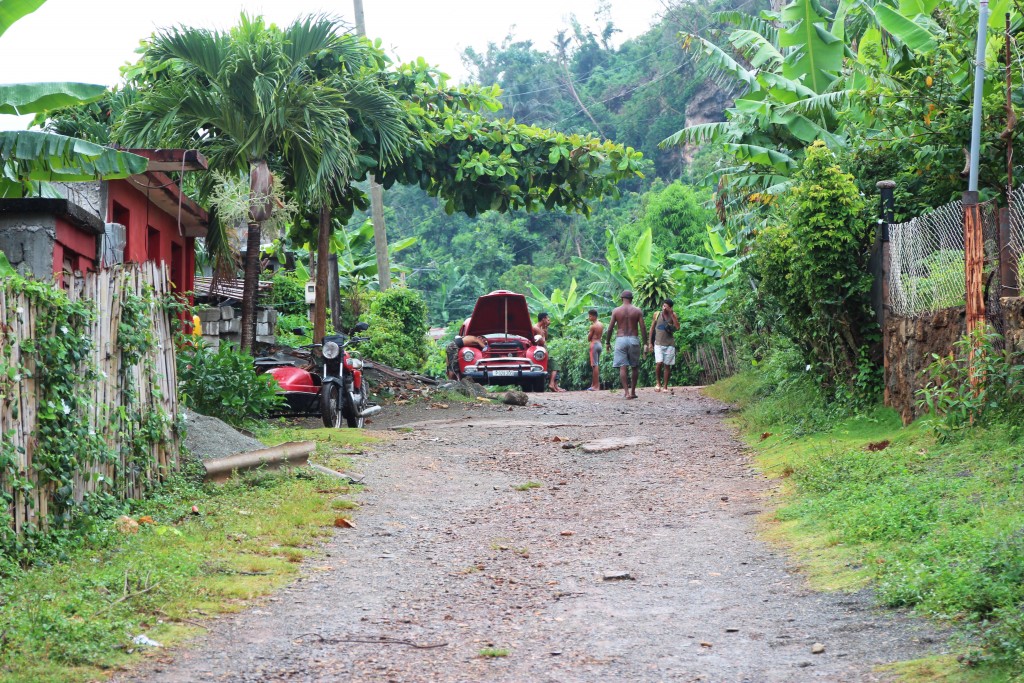 When we arrived at our Casa, once again we were greeted by our very friendly hosts. As it turns out, the Casa in Santiago de Cuba had told the taxi driver that I had been sick, and upon arrival, the taxi driver had informed our next hosts in Baracoa. Not that we knew any of this right away. The farther we’d gotten from Havana, there was less and less English spoken, and the Cuban dialect of Spanish seemed much stronger the farther away we got from Havana, too. I’m by no means a Spanish expert, but I found it more difficult to understand their Spanish and they, me. So how did we figure all of this out? Less than 5 minutes after arriving, the Casa host knocked on our door with a cup of piping hot (and very strong) tea that he told me was for my stomach (with hand motions).
The rest of the day was relatively laid back, including a nap, a stroll through the city, and a walk along the malecòn. And that’s when it hit me. Slowly but surely I was getting the symptoms of Montezuma’s Revenge just as Jon was starting to feel better… 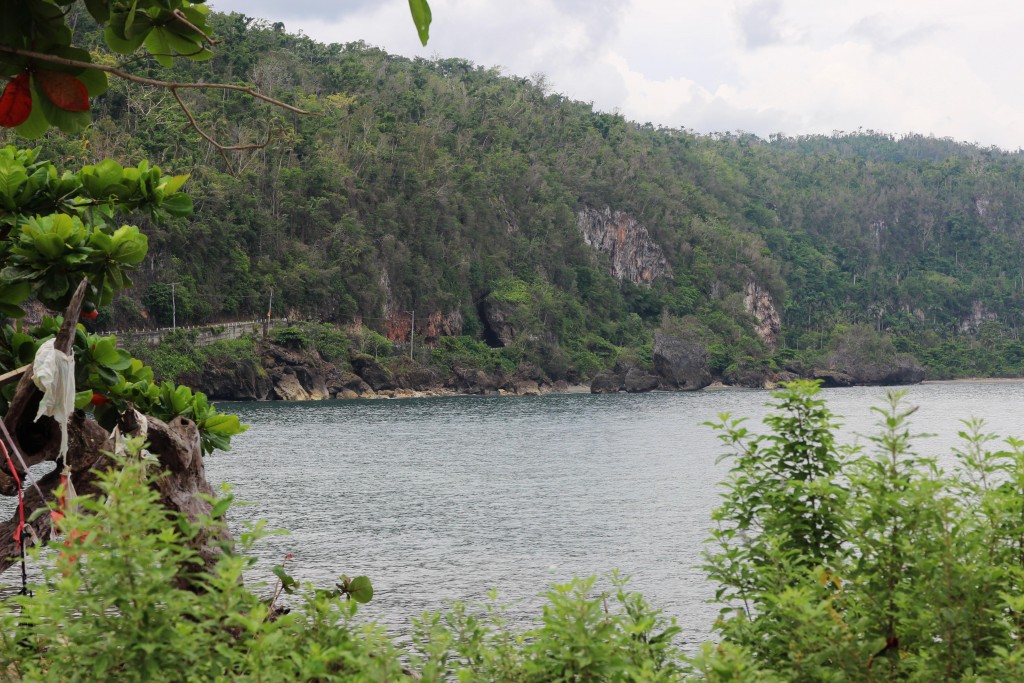 At around 8 o’clock that evening, José Ángel Delfino Perez met us at our Casa. He was going to be our guide for the next day. Our guide book had recommended him and so we had sent him an email in hopes of managing to get a day tour with him. As luck would have it, he had an opening for us. As we sat down to talk, he told us that while he would be happy to guide us wherever we wanted, he had a couple specialties that he could recommend. The first was a tour of the national park that was nearby. We had heard about the national park and that it was pretty amazing. But his second option was the real reason we were in Baracoa: a chocolate tour. After he gave us our options, we knew exactly what we wanted. Who can pass up chocolate?
That night, while Jon was on the mend and starting to get a better night’s sleep than the previous night, I was still tossing, turning, and generally waking up during the night. I kept drinking my liquids and eating a few saltines throughout the night in hopes of feeling better by morning. But unfortunately that wasn’t the case. I woke feeling pretty lousy and needing frequent trips to the bathroom.
Just after breakfast at the Casa, José Ángel picked us up for our tour. (Ironically with the same taxi driver we had used the previous day from Baracoa no less). Our first stop was a cocoa plantation. On our way there, José Ángel told us about the flora and fauna of the region. He also told us about the destruction that Hurricane Matthew had caused to the region. The hurricane made landfall in October of 2016 and had done most of its damage to Baracoa where it had parked itself for 12 hours before moving on. Up to this point, it has been Cuba’s second most expensive hurricane to clean up from, and it was so recent that our guide book hadn’t been updated to include any details about it. 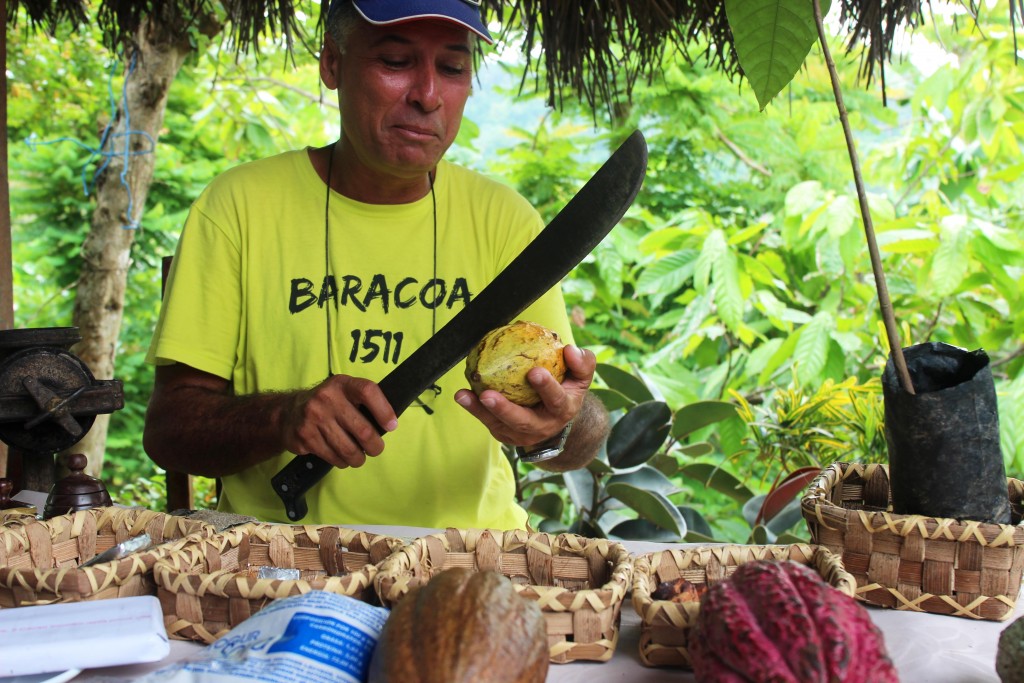 At the cacao plantation, we sat down at a table outside the farmer’s house where they started bringing out trays of cacao seeds, plants, chocolate, and other cacao products. For an hour and a half, José Ángel kept us enthralled with stories about the cacao bean, starting from where it is planted and how it is grown, all the way threw how it is roasted and turned into chocolate. I had no idea that cacao beans started out coming from colorful pods that were larger than both of my hands put together, or that inside of those pods was this strange milky liquid that surrounded seeds the size of quarters where all of the beans hid. At the end of the discussion, José Ángel brought out products that we could buy from the farmer directly, including chocolate (of course), baking cocoa, chocolate-banana truffles, cocoa butter in precious wood containers, and even the farmer’s own version of an energy drink that they use out in the field. We pretty much bought it all. 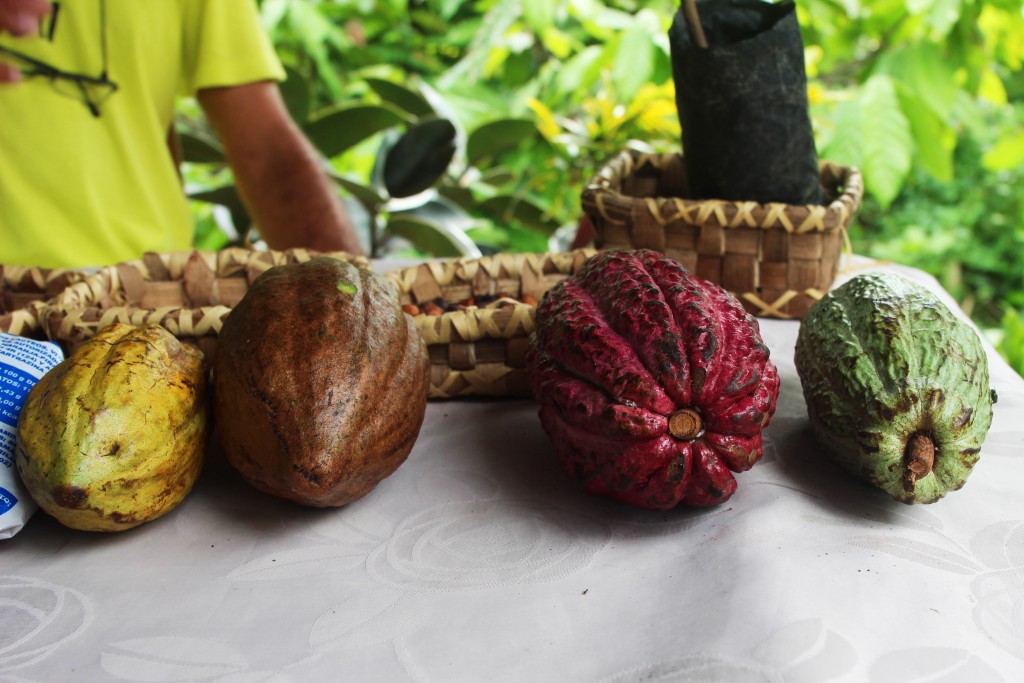 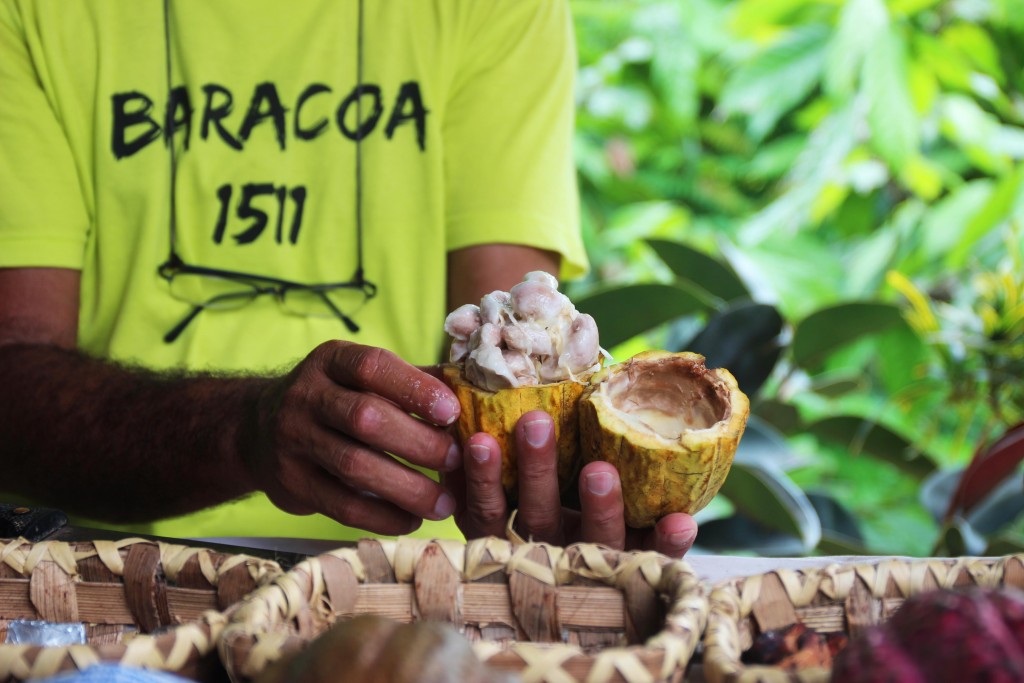 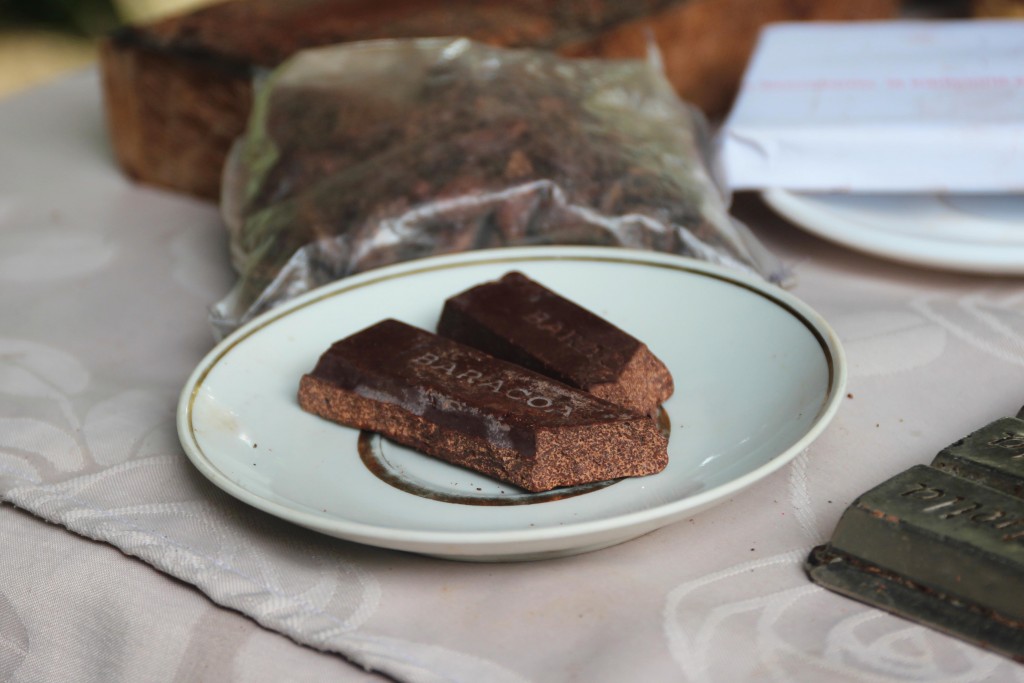 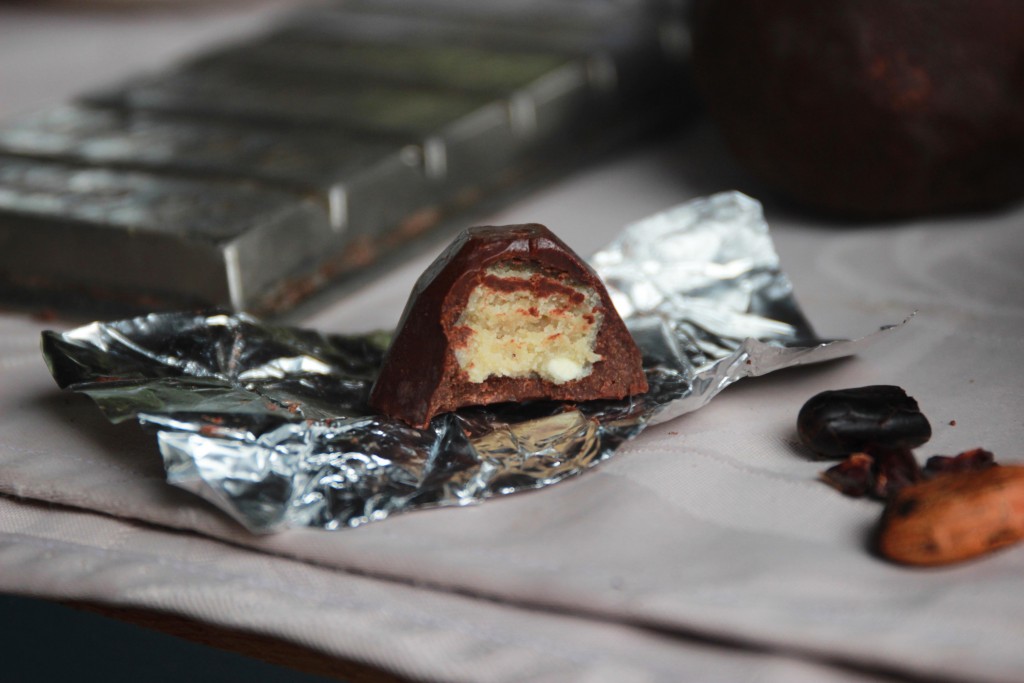 After we left the plantation, we continued driving down the road farther into the countryside where the evidence of Hurricane Matthew was even more visible from all the palm trees laying on their sides. Eventually we stopped again, this time beside a dirt road going out to the ocean. For half an hour, José Ángel led us along this road, pointing out many different plants and their uses. Surprisingly, the majority of the flora in Cuba is not native to Cuba. Much of the original flora disappeared after the colonists started to come and setup. They harvested a lot of the wood and cleared out the land to make space for their sugar plantations and crop fields. After they left is when new plants start to move in. 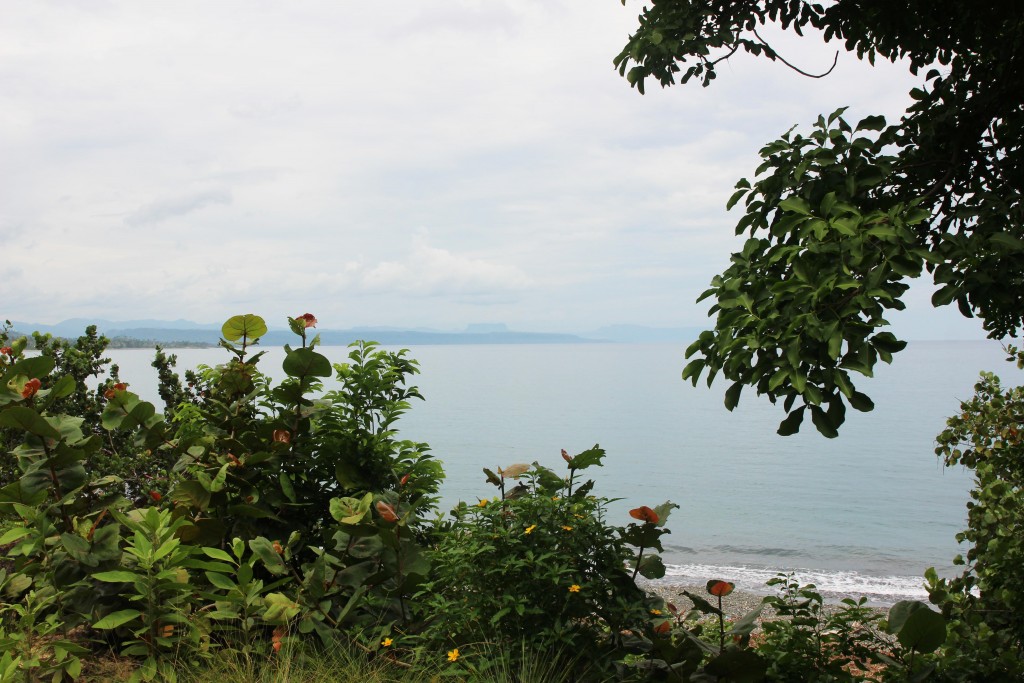 Our dirt road terminated underneath a dilapidated bridge with a little wooden dock that extended out into an estuary where several row boats floated on the incoming tide. A couple women had setup a table just beyond the dock to sell their wares, though there weren’t a lot of customers the day we were there. José Ángel told us about a few of the treasures that the women were selling, then led us to the dock and told us to wait a moment while he ran into a little wooden shack that served as the tourist center. A couple moments later he came back out with another man who shuffled out into the water and pulled one of the boats along side the dock. 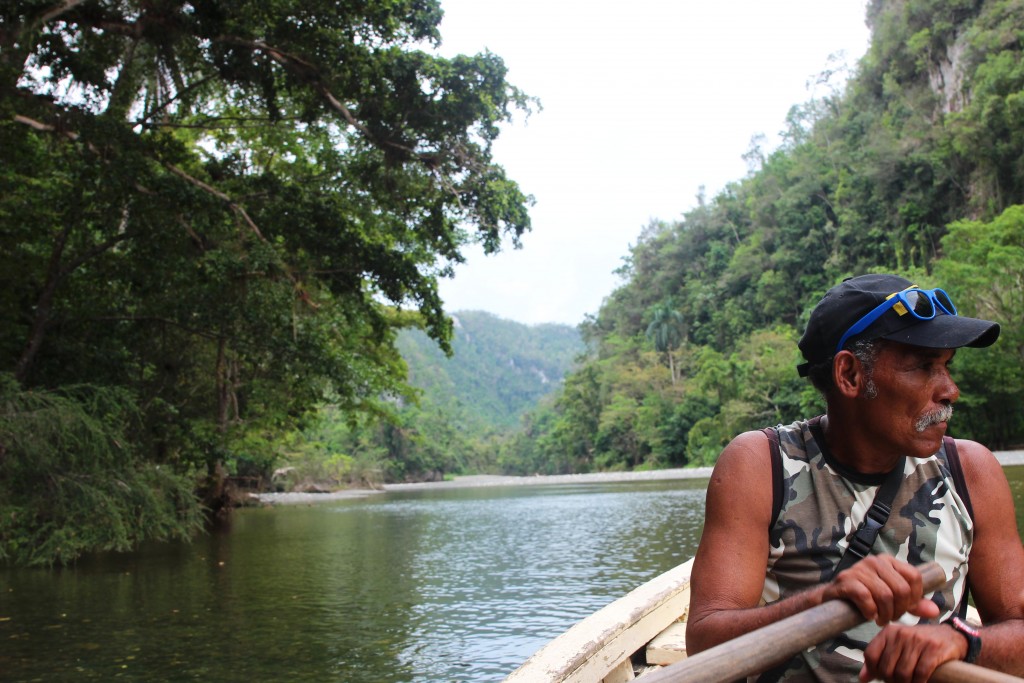 We climbed in and José Ángel assured us that we had the best rower in all of the land. Our rower dipped the oars into the water and we pulled away from the dock, headed up the river. For another hour, José Ángel directed the rower up one side of the river and down the other, often calling out to look in the bushes or up the limestone river walls whenever he spotted a new bird or creature. At one point he even pulled out his phone so he could “call” the national bird of Cuba, the Cuban Trogon or Tocororo. Though elusive to spot, the bird is special to Cuba as its coloring matches the national flag.
As the rower was approaching the dock so we could get out, a few rain drops were beginning to fall. We spotted the taxi up on bridge above us, so we hustled up to it as bigger drops began to fall. José Ángel climbed in after us and off we went to our final stop, one of Baracoa’s nicest beaches with what turned out to be a very good restaurant. 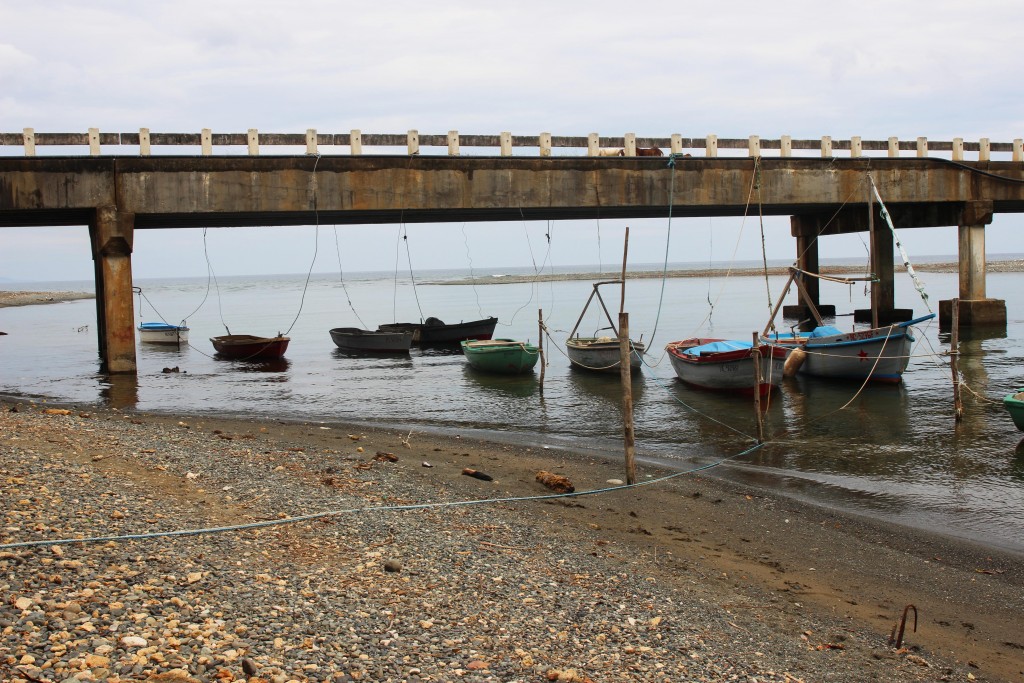 By the time we made it to the beach, the rain had begun to pour down so we all ran from the taxi to the restaurant. All of the beach-goers were huddled either under a big tarp outside the restaurant or on the restaurant’s sheltered patio. We took a seat at a table and took up our menus. We ordered one plate of standard Cuban chicken with a virgin piña colada to share. Unfortunately, thirty seconds later the restaurant lost power so we had to forgo the piña colada and instead just get a couple colas. While we waited for our food to come, we watched as the rain poured off the restaurant’s roof and the wind whipped the big tarp back and forth. Rainy season had made it to Baracoa.
With full stomachs, we decided to cut our trip to the beach short, seeing as how the rain didn’t look like it was going to be giving up any time soon. Our taxi took José Ángel and us back to our Casa, stopping once to let José Ángel run into father’s farmhouse to pick up some milk.
Luckily I was still feeling pretty decent (likely because I hadn’t eaten much), so to make the most of our time in Baracoa, we headed to the Museo Arqueologico la Cueva Del Paraiso, which happened to be quite a ways up in the hillside of Baracoa. However, it gave us magnificent views and we were also able to spot an endangered snail. The weather was questionable and it was spitting rain every now and again so we decided to head back for a siesta at our Casa where I could lay down to give my stomach a rest from the day’s activities and to give the rain a chance to blow through. 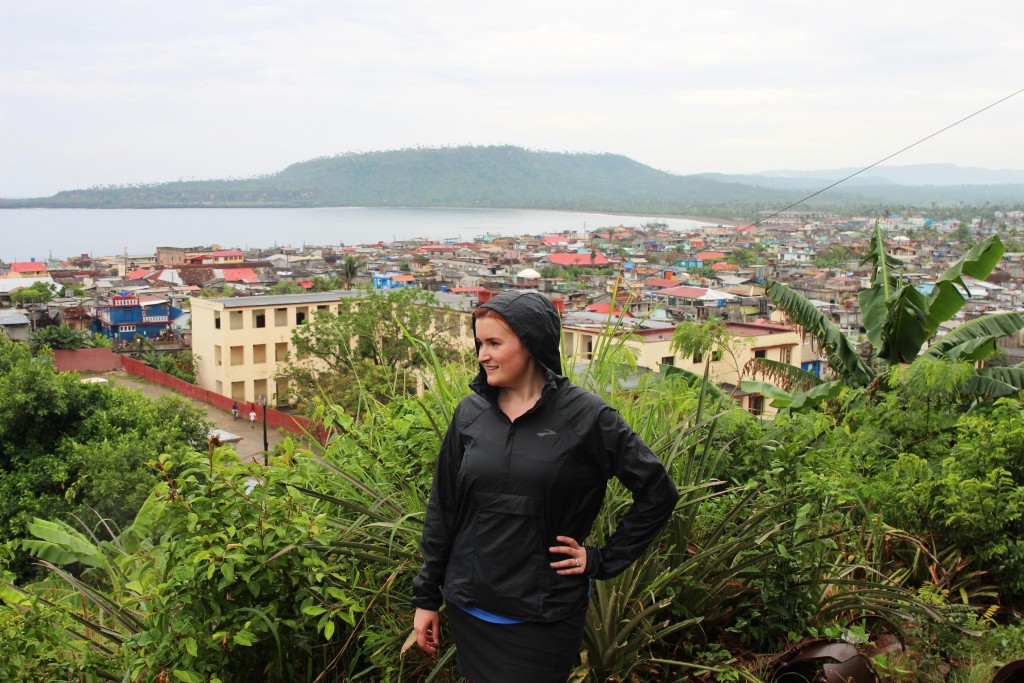 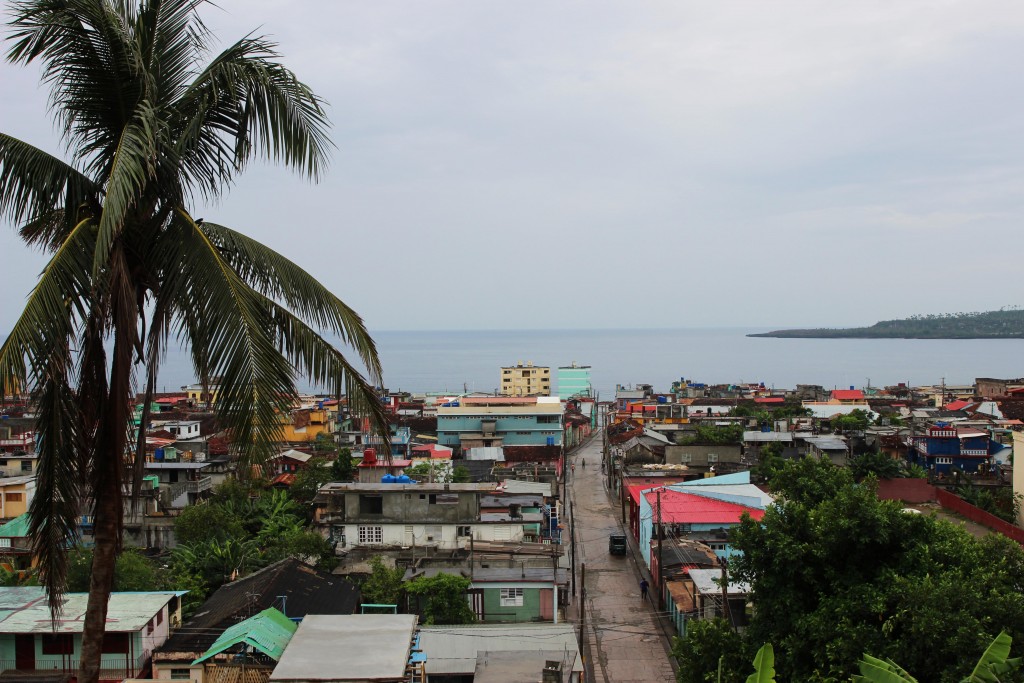 When we did stand up again, the rain had slowed, though it wouldn’t fully stop for the rest of the day. But since our early morning flight was quickly approaching (or so we thought), we decided to have one last dinner in Baracoa. Our rain jackets came out again and we walked back to town in search of a Cadeca, some dinner, and a bit of Wi-Fi. But, my stomach was angry again so our night on the town was short-lived as I was in too much pain (and needing to be close to a bathroom). I was looking forward to getting back to Havana since my stomach was in so much in pain and it has been a few days since I’d been able to eat anything of any substance. As we laid our heads down that night, little did we know our adventure was just about to get started…
The adventure continues on the road to Moa and Holguín.