[25faces_intro]
Coming off the heels of my own journey to Norway and France, I knew I wanted to interview someone whose desire to travel and sense of adventure would be an inspiration to us wanderlusters. I’ve always been one to travel with everything planned out: confirmation emails printed and filed, extra copies of passport in hand, and a schedule drafted. I’ve never gone anywhere on a whim or with the potential to be remotely dangerous. This February, just prior to my trip, I read Kyla Merwin’s memoir Lost & Found in Egypt: A Most Unlikely Journey Through the Shifting Sands of Love and Loss, which chronicles Kyla’s solo journey to Egypt in the winter of 1999. Kyla did what so many dream of but are afraid to do: left her ordinary life for a whirlwind journey to a place that was completely unknown to her, with very little to guide her but a sense of adventure. 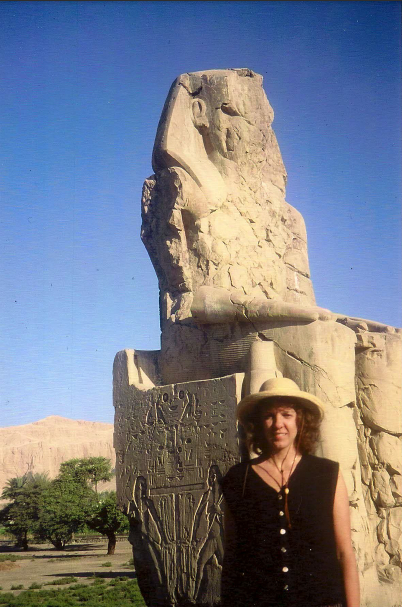 Kate: You were living what would be considered a pretty normal life. You went to work, paid bills, ran errands. What was the moment in which you realized that you needed a change?
Kyla: The need for change had been percolating quietly for several years. It started when I lost a dear friend to suicide, which upended the way I saw, felt and interacted with the world. Everything seemed different to me. The desire to make a grand gesture in my own life came from that loss.
K: How did you decide on Egypt? How long did it take you to make preparations to leave?
KM: I picked Egypt because I was working on a novel that takes place in Egypt in 1947, centering on the discovery of the Gnostic Gospels. I stumbled on this topic “serendipitously,” shortly after my friend died.
Preparations? What preparations?
K: What did you hope to take away from traveling to Egypt? Did it affect you in ways you didn’t expect?
KM: I expected to learn a great deal about the landscape, the culture and the ancient monuments, which I did. I was also on my own healing pilgrimage to Mt. Sinai – to climb the mountain of Moses, hear the monks chant at dawn, and feel the grace of God. Things went wrong from the start. My trip to Sinai taught me many important things, one of which is: Don’t worry, everything will turn out amazing.
K: You took your trip to Egypt in 1999. Since that time, have you continued to travel?
KM: I have continued to travel, including trips to Bosnia, Switzerland, Germany, Austria, and England. I’m also a road tripper frequently traveling to new destinations in Oregon, Washington, Idaho and Montana. I often take my Golden-Retriever-on-the-Go, Pippin, with me on adventures. My 1999 Saab just passed 170,000 miles. I love that car. And my dog.
K: What advice would you give to those looking to travel and experience the world?
KM: The Muslims say, “Trust Allah, but tie up your camel.” I like this advice because it calls for common sense, precautions, and an awareness of your environment. I don’t walk blindly into sketchy situations, just assuming I’ll be okay because God loves me. No. I am careful and keenly aware of my surroundings. That said, once I get where I’m going, I leave a lot of the details up to spontaneous inspiration and the choices that unfold around me.