A few weeks ago I began my Fashion Flashback segment as a way to share my love of history and fashion. Through these posts I’m sure you’ll find that I love the 1940s & 1950s. For as long as I can remember I’ve romanticized this period, longing to experience what life was like back then (and of course wear their great clothes). I’m not sure why I’ve always been drawn to this era, but I think that it started with my Grandpa Bruce. Grandpa was a merchant marine in World War II, on a liberty ship that was torpedoed by the Japanese. He was one of a handful of survivors. I’ve always been proud of him and have loved looking at photos of him and his family from that time. In college I heavily studied World War II, and I still have an appetite for anything and everything from the 40s & 50s and am forever seeking out all that I can about World War II.
Today is the 71st Anniversary of the Attack on Pearl Harbor, a day that has indeed lived in infamy. On that fateful day more than 2,400 Americans were killed in the attack and over 1,200 were left injured. Shortly after the attack, the United States entered World War II, sending many men overseas to fight. For all those who fought for us thank you for your service, and for all of those who continue to fight for us, thank you.
With a large number of men fighting, women were left to do what had traditionally been “man’s work.” You might not realize that this slight shift would cause an affect on women’s fashion, but in fact, it had a profound impact on women and their attire. It’s strange for us to imagine a time where pants were not an acceptable form of clothing. Even though women began wearing pants in the early 1900s, women who wore pants or pantsuits such as Hollywood starlet Katherine Hepburn, were viewed as rebels. It wasn’t until World War II when many women went to work in factories that pants became an acceptable item. Many wore their husbands pants to work not only to save their dresses but also because of safety issues. Victory suits became a popular trend as women could mix and match skirts, shirts, pants, and jackets.
The war truly shaped women’s fashions not only with respect to wearing pants. The fabrics and styles of dresses were also a direct reflection on the time. With the rationing of materials, dresses went from mid-calf to knee length, and took on a more militant style (hello, shoulderpads!). Post-war, pants continued to be acceptable wear for women because of their practicality and comfort. For a more in-depth look at women’s fashions in the 1940s, click here. 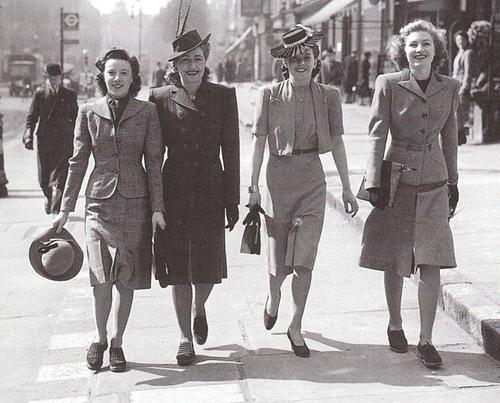 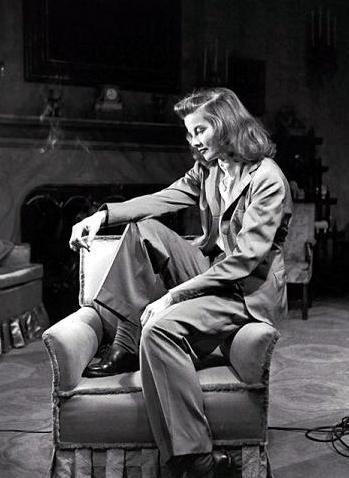