[25faces_intro]
I’ve known Natalie since we were in kindergarten. We played basketball together, attended banquets together, and even graduated high school together (her the Valedictorian and me the Salutatorian). During all of those years, Natalie knew exactly what it is she wanted to do with her life – become an astronaut. She chased her dream and is well on her way to becoming an astronaut. 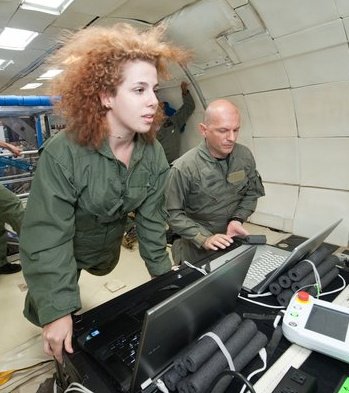 Kate: What was it about going to space that interested you, and how did you come by this fascination with becoming an astronaut?
Natalie: I’m not entirely sure when it started, but I just remember looking up at the stars and wishing I could know what it was like to be there. I wanted to be next. As I’ve gotten older and had the opportunity to work at NASA, I found myself excited about other parts of the astronaut job description as well, namely getting to inspire the next generation, work so closely with people from all backgrounds and cultures, and the incredible variety in training. One day you’re taught how to fly a T-38 jet out of Pensacola, Florida (whether you’ve had any previous flight training or not), and another you’re SCUBA diving in the Neutral Buoyancy Laboratory (the world’s largest “swimming pool” by volume) floating next to a mock-up of the International Space Station. It would be an incredible journey to see our planet from a distance and the kind of opportunity to do things that most people just dream about.
K: What pushed you from simply dreaming of being an astronaut to taking steps to make your dream a reality?
N: I have to say a lot of my success, if I can call it that when I’m barely starting my career, came from the support of others. I was so blessed to always have people around me who had no doubts whatsoever that I could achieve my dream. I know many inspirational people who were motivated by the naysayers in their life, but it was equally motivational for me to have encouragement from family and friends alike. Sometimes I wish it was the other way around because I didn’t end up with a very thick skin! Either way, all I could do was try and going to Embry-Riddle Aeronautical University for engineering seemed like the best start. It has certainly been the biggest challenge of my life, though, because my dream was never to be an engineer. It simply became the tool that would open the door to working on the space program and in the aerospace industry. Engineering has such a fun variety of topics and job opportunities but it takes a lot of determination if you’re not a natural! 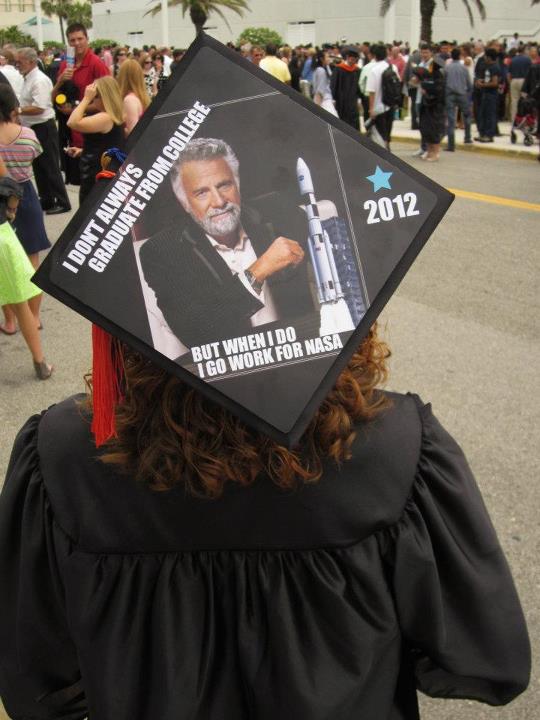 K: What goes into becoming an astronaut?
N: There’s a lot of cliché “to-dos” people will tell you about when it comes to trying to make yourself the best possible candidate to be selected. Having your pilot’s license, operational experience, SCUBA license, and a PhD are all great things, but I believe you shouldn’t do things you aren’t passionate about. For example, it’s noble that so many astronauts are passionate about running marathons. I just ran my first 5k and was enormously proud, but I never want to run anything longer! EVER. In reality, as the head of astronaut selection told me once, NASA wants people who are healthy, love what they do, are good at what they do, and perhaps most importantly, are somebody that astronauts would want to be stuck in a smelly tin can with for months on end. Sounds a little silly, but if you think about it for a few minutes, it makes sense. You can look good on paper but so much of life is about how you connect with others!
There are, of course, basic qualifications, but it’s not the test-pilot-only male club it used to be in the early days. And I’m not saying that like I don’t admire them; John Glenn has always been my favorite astronaut. 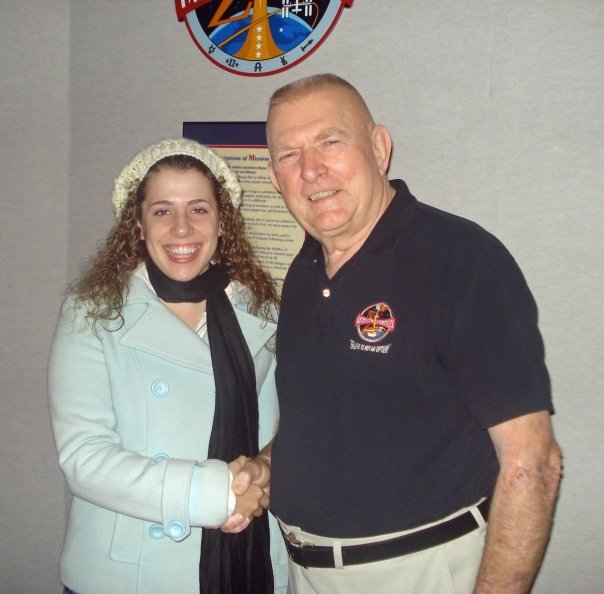 K: You’re now working for NASA. What was it like applying for a job there? What types of things do you daily?
N: To truly work FOR NASA (as a civil servant instead of a government contractor), there are very few channels. The main way is through the co-op program (which is now known as the Pathways Intern Program). I had the opportunity while I was an undergrad to have “tours” at Johnson Space Center in different groups. Engineering students are encouraged to spend at least one semester in both a mission control operations group and a “pure” engineering group. My first experience was actually as an intern (a one-time thing) with a materials engineering group. I can’t tell you how surreal it was my first day when the security guards waved me forward in Houston. I was actually working at NASA! Next, I applied for the co-op program and spent time in a mission control group and an aircraft group. Some of my favorite memories include doing a co-op mission control simulation, floating in simulated microgravity on a very unique Boeing 757, and hurtling at the Kennedy Space Center runway in the Shuttle Training Aircraft with the very last Space Shuttle pilot. Having over a year of real-world experience (I also worked at Boeing one summer) before graduating was incredible. I wasn’t worried about finding a job or feeling like there was no light at the end of the university tunnel.
As for daily work, I’m finishing up my Master’s degree at Purdue University and starting full-time at Johnson Space Center in August after I get married (busy year much?!). I’m returning to a mission control group responsible for the computers and video feed on the International Space Station. It will take around 2 years for me to become fully certified to sit in that room you always see on NASA TV, but I’m excited to finally settle in somewhere. For now daily life will involve classes, simulations, training, and even tests but I’ll be right in the middle of our manned spaceflight program! 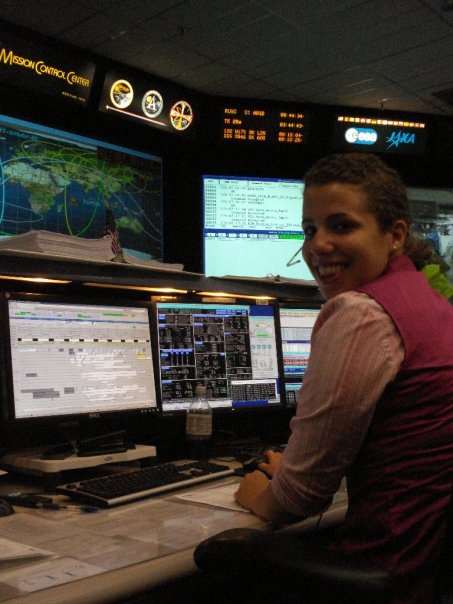 Natalie in the Mission Control Center

K: What’s your ultimate dream?
N: I guess another way to phrase the question is, “would I still jump at the chance to be an astronaut?” Yes. Definitely. Maybe not one of those one-way trips to Mars you hear people talking about, but going to the moon or spending some time on the Space Station would be marvelous. Quite honestly, though, I won’t feel like my life was a waste or a failure if it never happens. Wanting to be an astronaut is like wanting to be a superstar singer or actor, you can have all the qualifications but it still takes a “break” or being in the right place at the right time. I believe there’s a plan for my life so I’m not worried about it. I think my dreams have grown to simply include getting to love my fiancé for the rest of my life, traveling the world together (he’s a pilot), and teaching our children to dream big just like we did. It’s hard to imagine seeing incredible things off-planet without having people I love to experience it with me. For now I am absolutely content in doing my best to keep our crew safe as they orbit over 200 miles above me. And hey, I really do love flying and SCUBA… let’s see if the formula works. 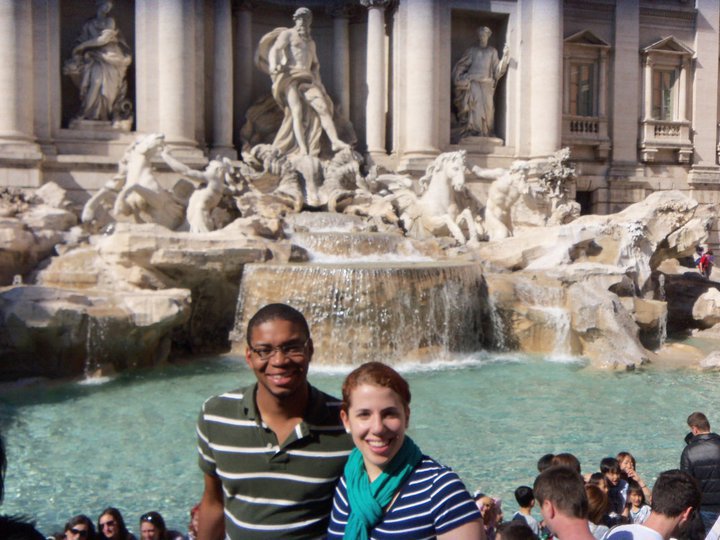 Natalie and her fiance, Loren, in Rome.